Bars and a Smoothie

I seriously think it might be worth buying energy bars at the store because they take some work in the kitchen. 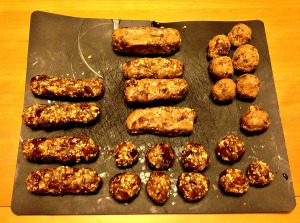 The good thing is that they last a while and make for the perfect quick snack. They’re versatile and store well.

I’ve made these bars before, but this time I was able to hammer out a recipe:

Combine peanuts and dates in a food processor. If you have a ghetto fabulous food processor like me, cut the dates up before processing, and combine everything in several rounds.

The little processor that could

I added 5 tablespoons of almond butter and 1 tsp of cinnamon to half of my batch. The other half I left plain. Other ingredients you could add include: peanut butter, coconut, chocolate, chocolate chips, flavoring extracts, fruit, nuts.

After an AM cardio session, I had a smoothie on the brain. I love having a frozen drink after a hard run.

Mix first 7 ingredients in a blender until combined. Next, add the cup of ice. Blend until the mixture forms a smoothie. Poor into a large glass, drink and enjoy. 🙂

Have a wonderful weekend!

24 thoughts on “Bars and a Smoothie”